A little over two years ago, I decided as an experiment in social media marketing to set up a one-page website and see how far I could take it in terms of generating traffic, and ultimately revenue. After allowing the project to run for a year longer than anticipated, I have decided to shut it down and record my thoughts on the failure of this project here.

The website that I set up, IAmNotMyTShirt.com, was designed as a mock protest website which was attempting to create an online movement to stop people from wearing t-shirts with logos or other marketing material on them. It was all done in a very tongue-and-cheek manner however, with the posts mainly highlighted amusing t-shirts that I had spotted people wearing in my daily life over a one-year period.

The site contained a single page with a cartoon logo, some text explaining the purpose of the site, some social network widgets for promotion, and finally a feed of the latest posts. The posts themselves were posted on a Facebook fan page, so that if a user clicked on a post link they were brought through to Facebook, which hopefully they would then "like" to create some social uplift. Sadly that uplift in traffic never happened, as we will see when we look at the Google Analytics results later. 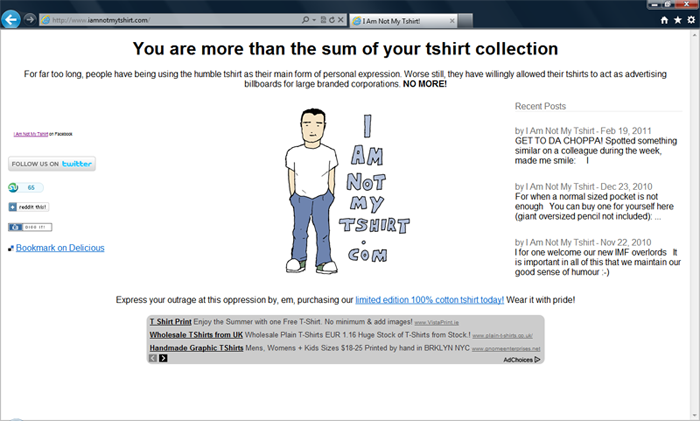 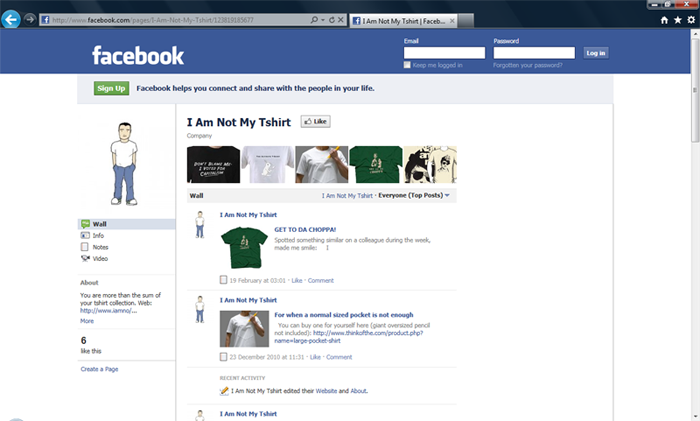 There were two revenue streams:

Given the low amount of traffic to the site, the amount of revenue generated was tiny, while not a single t-shirt was sold.

The website went from an initial concept in my mind to a go-live in less than 24hrs. I purchased the domain name first, which is a play on the famous "You are not your ******* khakis" quote from the movie Fight Club. Next up I sourced the cheapest shared hosting I could find. I knew that the site would be just Javascript and HTML, so I did not need a hosting plan with support for any backend technologies like databases or interpreters. I then set up the Facebook fan page, and added its feed to the new web site using an RSS feed reader widget from Google, some Google Analytics so that I could track the incoming traffic, and then began to promote the site in earnest.

The first thing I done was "like" the Facebook page myself. I am not a big Facebook user and only have about 50 friends, and sadly none of these re-liked my page when they saw it in my feed. In fairness to them, I did not encourage them to do so or even tell them I was behind this page, as I wanted any viral growth experienced to be natural to satisfy the experiment.

Next up, I submitted the site to StumbleUpon, which in my experience is very much a hit-or-miss affair. I have had some of my pages fly on that site and bring in lots of traffic, while others (like IAmNotMyTShirt.com) not catch on at all.

I also submitted the site to Digg and Reddit, but frankly I have never gotten any traffic from any of those sites for any of my projects, and I did not invest enough time in learning how to use them beyond the initial submission.

In terms of SEO, I also added links to the site from other public web pages I own, including from my LinkedIn profile and my About.Me page. Google did come in and index the site pretty quickly, but given that the site had only one page and not a lot of keywords, I never really expected a lot of traffic that way.

The nice thing about this experiment is that it proves just how easy and quickly you can launch a website, albeit a simple one. The go-live of the website, along with the purchasing of the domain name and the setting up of the matching Twitter and Facebook presence, all went very smoothly.

Traffic (or rather lack thereof). Even when you think you have all of your separate components neatly lined up, some decent content and a decent core concept, it is very hard to get noticed on the Internet. Frankly, while I learned loads of new techniques on this little side project about website promotion via social networks, I still failed to gain any real traffic to the site to even cover its tiny annual hosting costs.

Looking at the year between 1st Jan 2010 to 31st Dec 2010 for example, according to Google Analytics I got:

I learned a lot on this side project about social media tools, but I also learned that if you want to succeed at viral marketing via social media, it requires a lot of hard work and determination, which I never had the time to dedicate to this project.

As for the website itself, I might re-design IAmNotMyTShirt.com at some point in the future as I still like the concept and the content that I had there on the Facebook fan page, only this time round I would need to give it the attention that a project like this would require to even break even.

Updated 2022 : note that the above post was originally published in 2011, but is left here for archival purposes. I no longer own the IAmNotMyTShirt.com domain as I let it expire, so have unlinked all references to that above. I have also unlinked Twitter Feed which has since shut down.