I had been away from PC gaming for a number of years, when videos and impending release dates for Fallout 4 and Doom 4 (AKA "Doom 2016") drew me back in. The problem was, I no longer had a gaming PC or the time to build one like I did in the past. I decided I would purchase a pre-built machine, and the Alienware X51 really hit the spot for me, between it's small desktop footprint, quiet performance with liquid-cooled CPU option, and still decent gaming performance.

There are many variations of the machine available, this is the configuration I bought late in 2015:

Overall it's a powerful little machine and I am very happy with the purchase, it's already given me a lot of pleasure including over 100 hours on Fallout 4. However I always had one reservation: the GTX 960 with 2GB of VRAM is a pretty average card these days, and I knew it would be the first thing I would need to upgrade.

One sacrifice you make with having such a cool little tower on your desktop like the X51 is that it does not contain an internal PSU, instead it has an external power brick on the floor attached to the power cable, similar to a laptop power brick only larger. It only gives out 330W of power, so that really restricts your options in terms of graphics card upgrades. While I would have loved to max out and get the new GTX 1080 from Nvidia, I wanted to ensure that I did not strain the power supply, or end up buying a very powerful card only to find I had to throttle it back to ensure it did not overload my system.

So to remain within safe power consumption limits but still gain a significant graphics performance, I opted to get the GTX 1060, or specifically the EVGA GeForce GTX 1060 SC variant. I like this card for the following reasons:

It is important to get the "Super Clocked" or SC version of this card, as it's faster than the regular version from EVGA for a very small amount of extra money. 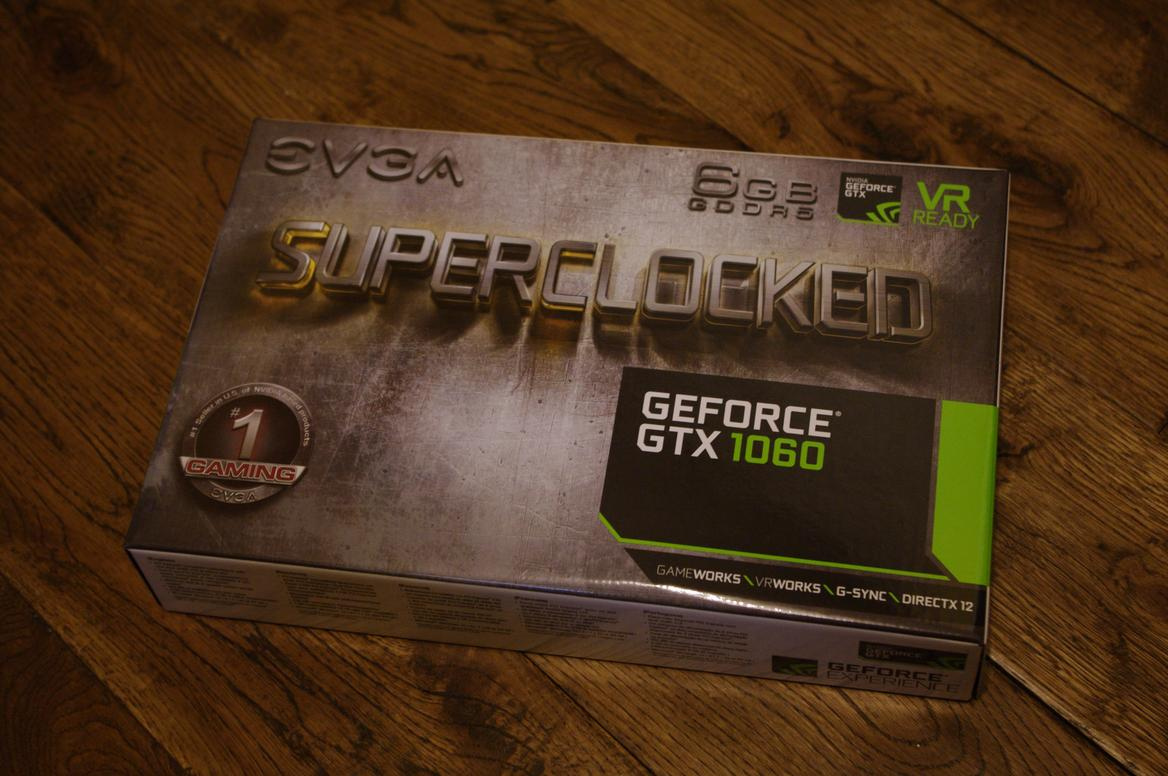 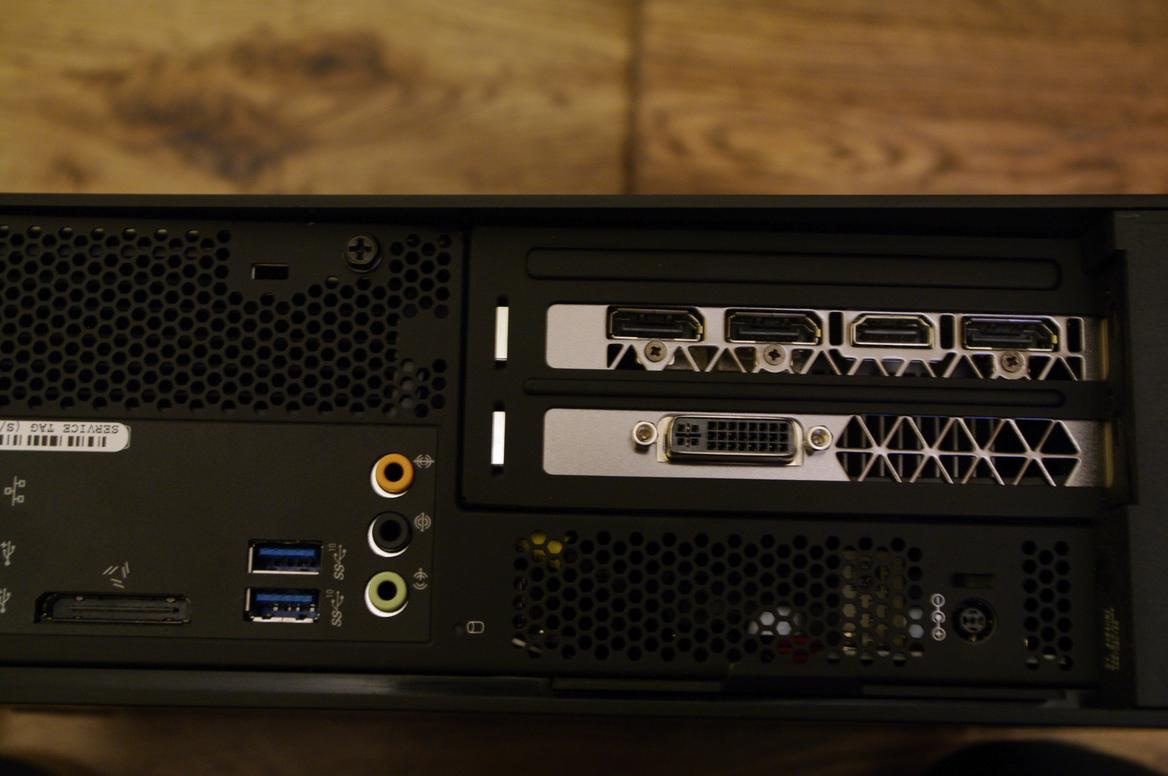 There is just a single screw on the back of the X51 that you will need to remove, after that the side panel just slides off with a bit of gently pressure. 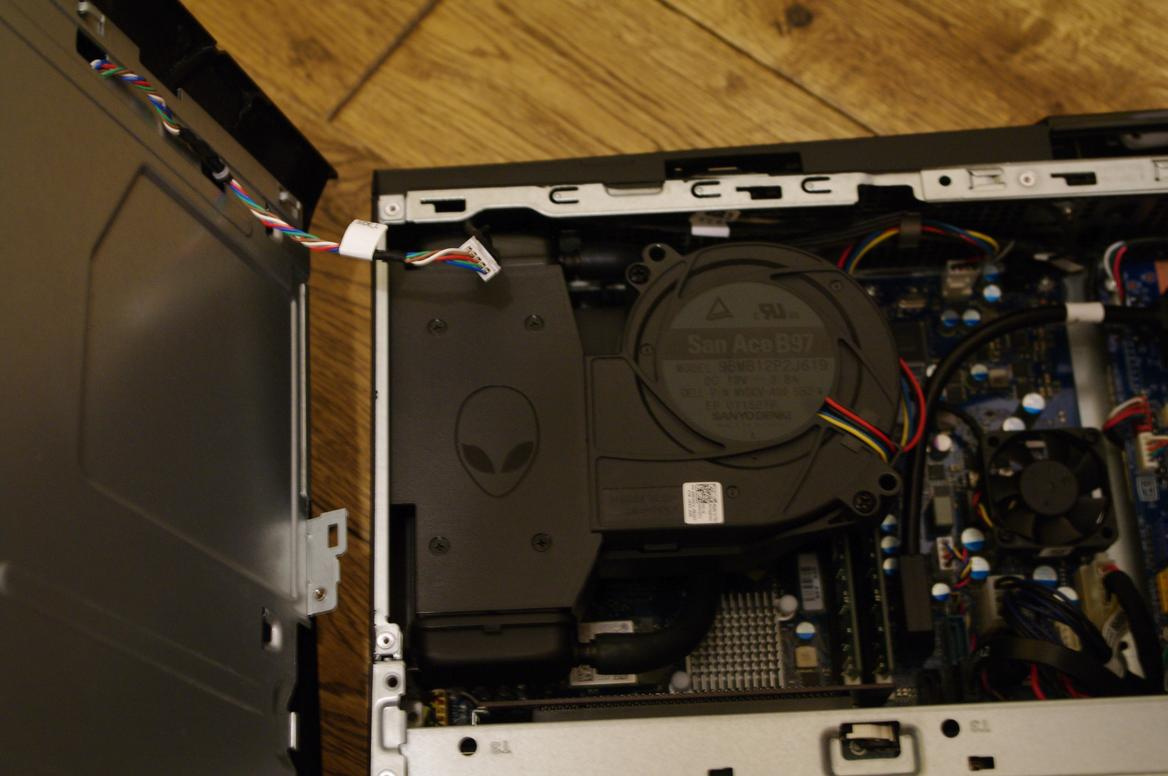 Note that you need to be careful not to damage this wire connecting the panel to the motherboard while removing the panel, it is used to power the light on the side panel. 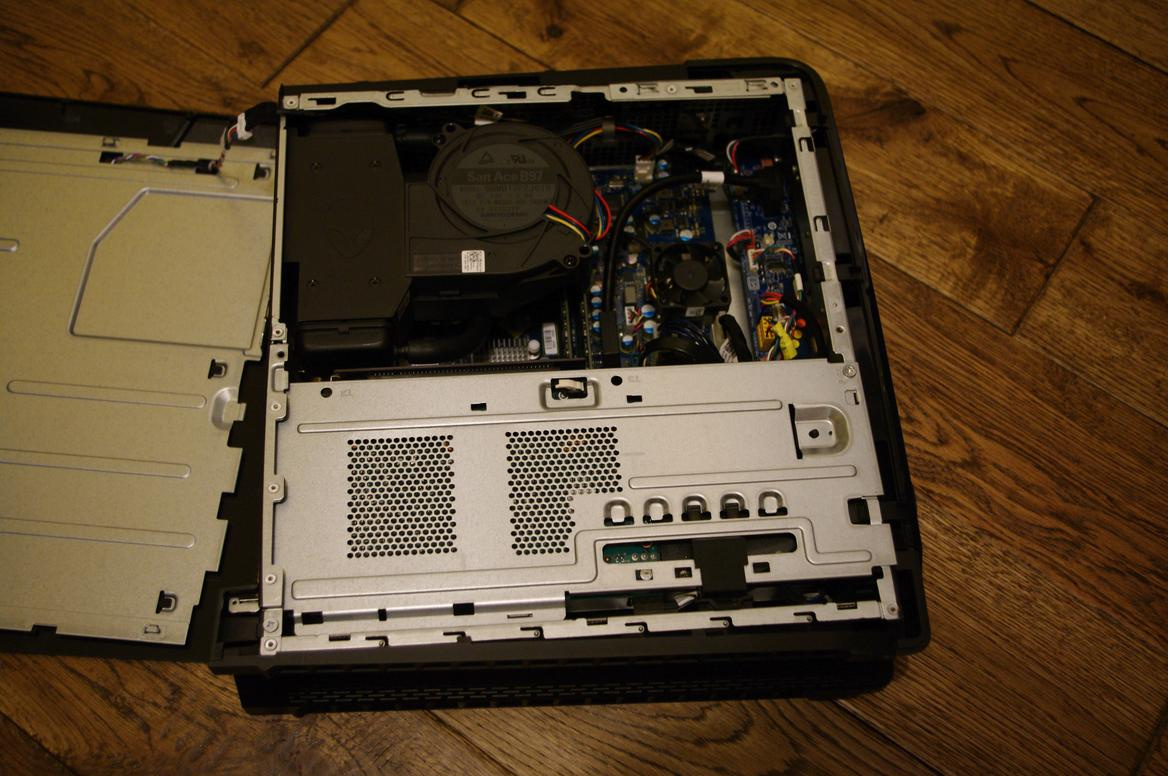 The graphics card is contained in that steel cage at the bottom of the tower, you will need to remove a further two screws in the top-right and bottom-left corners of that before gently pulling out the cage housing the card. 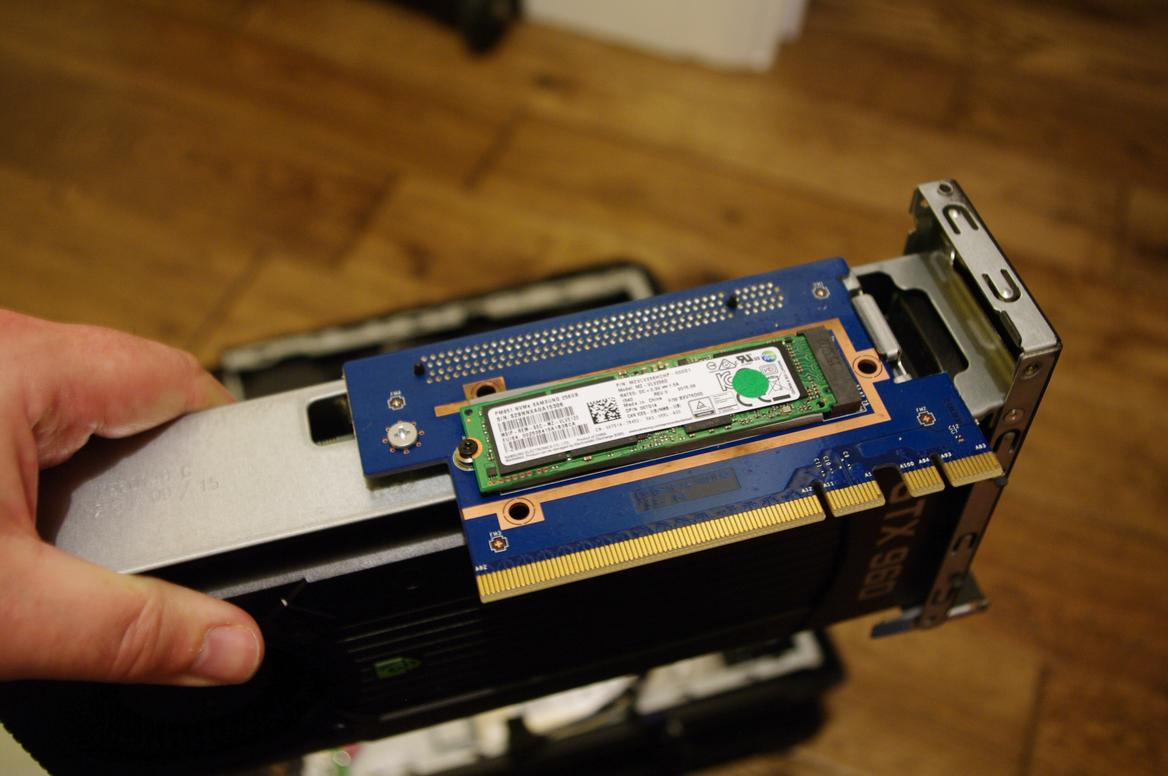 And here it is removed. Note that there is a six-pin power cord connecting the graphics card to the X51, which you can remove from the graphics card end now. Also notice that on my machine, the M.2 SSD actually sits on top of the graphics card cage on a riser card, not all machines will have this so your configuration might look slightly different. 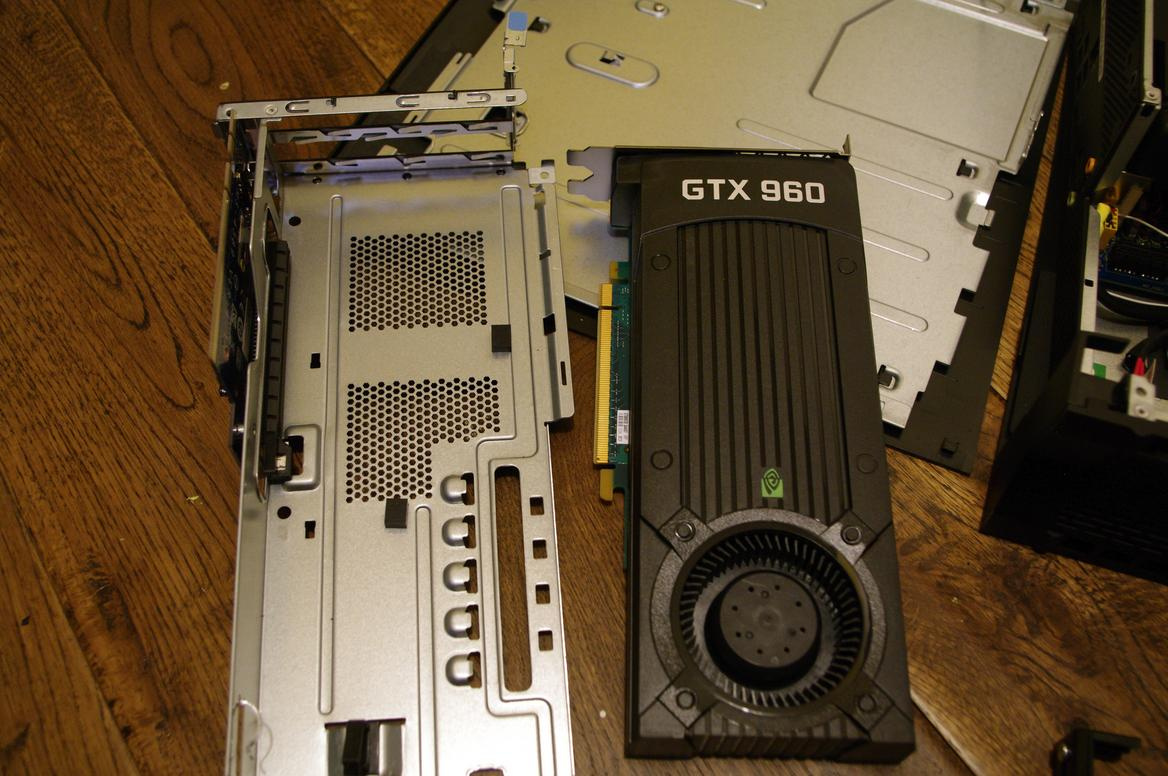 You should now remove the old card from the cage, by firstly opening the locking arm (the one with the blue tab in the above photo), and then gently rocking the card lose from the connection 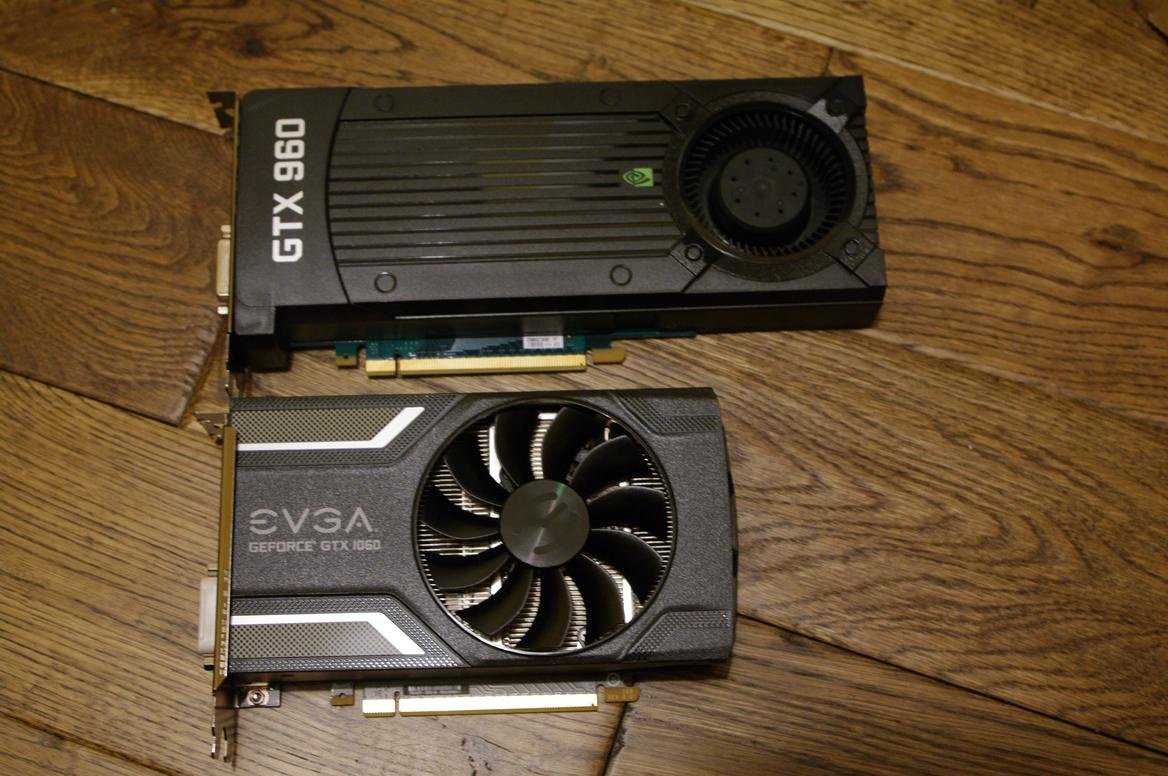 And here we have the old and the new generation of the same model, as you can see the EVGA GTX 1060 is a lot shorter than the GTX 960, but at this stage I was worried about the increased width. 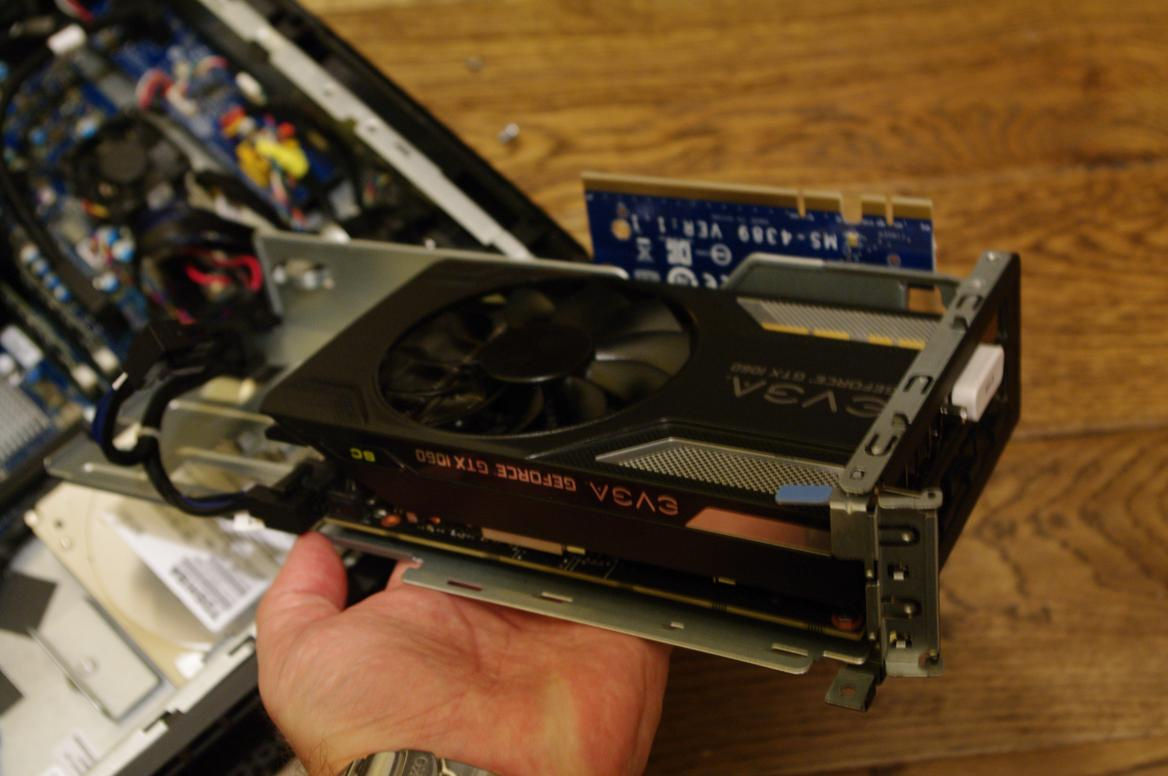 Thankfully as you can see, the GTX 1060 fit into the cage and case snugly, installation was as simple as plugging the card into the connection on the cage, re-connecting the six pin power cord, slotting the cage back into the case, and screwing everything back into place.

And now the moment of truth: once all of the cables are put back into the X51, hit the power button and the machine should boot up as normal first time, with the GTX 1060 now being reported as the installed card by the Nvidia Experience software and drivers.

And now to have some fun with benchmarks to see how much of an improvement I have gained. Using 3DMark, I took the liberty of running benchmarks on my old GTX 960 before installing the GTX 1060, here are the before and after results with all other hardware being equal:

* This is the percentage by which this result compares to all other PCs benchmarked on the 3DMark website, as of 22nd August 2016.

These results speak for themselves, and note that I have not overclocked the EVGA GTX 1060 SC or i7 6700K at this stage, both of which are running at default clock speeds.

In addition to the above statistics from 3DMark, I found that in actual gaming I can play the latest triple-AAA games such as Rise of the Tomb Raider, Doom, and Fallout 4 with the following choices:

In both cases, I can maintain 60 frames per second comfortably (note that is the limit of my 4k monitor). For older games that I like to play such as Fallout 3, Fallout New Vegas, and the Stalker series, I can play at 4k with high-ultra quality settings and 60fps. I have been playing for hours at a time now and temperatures never go above 81C, and I have had zero stability issues.

Overall I really like my gaming set-up now, and I should be able to enjoy the latest games for a few years to come without requiring any further upgrades. Recently I installed Elite Dangerous, and found that I could play it with 4k resolution on "high" quality settings with high frame-rates, and it looks simply stunning! My teenage self would have been so amazed with the quality of games we are playing these days, we have come a long way since the days I loaded Turrican from a cassette tape on my Commodore 64 :-)