An Introduction to Linux with Knoppix

The Need for Knoppix

Before I begin, I must admit to being a bit of a novice were Linux is concerned, so if you feel the same way about the powerful open source operating system, then you are in good company with this article. I have been working with Red Hat Linux through it's console (similar to the DOS command prompt), for over a year now, but until I heard about Knoppix, I had never actually used the Windows-like GUI (Graphic User Interface) of Linux before. On first impressions, if you have only ever used a version of Microsoft Windows before, then you are sure to impressed by the stylish and user-friendly Linux window system.

The problem for Windows users keen on trying out Linux is that, in order to install Linux, you need to either remove Windows and install Linux, which is a bit extreme, or partition your hard disk, with Windows on one partition and your choice of Linux (Red Hat, SuSE, Mandrake etc.) on the other. Combined with a duel boot control system that allows you to choose which OS to boot on start-up, this sounds like a good option, but in practice it can be difficult to implement for the average computer user.

This is were Knoppix comes in. Knoppix neatly side-steps the need to partition your hard drive by using your systems CD-ROM drive to boot from. All you have to do is change your system's boot sequence to boot from the CD-ROM before the floppy or hard drive, then insert the Knoppix CD, and restart your computer. When you next see your desktop, it will be that of the KDE desktop that comes as standard for all Linux distributions.

The Features of Knoppix

Using a form of data compression, the Knoppix CD contains approximately 1700MB of software, making it a very feature-rich distribution of Linux. All of the main Linux applications are present, such as the office productivity suite Open Office, the graphics program GIMP, and for all of you web developers out there, Apache, Perl and PHP are all included. In fact over 900 software packages are present. All told, after compression, the disc contains 699MB of data, leaving exactly one meg free; it is fair to say the Knoppix makes full use of the limitations of the medium. Lets hope they release a DVD version soon! 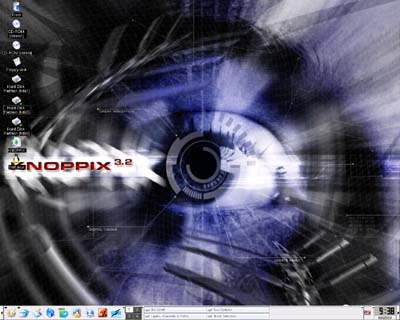 One of the most impressive features of Knoppix is that, like most distributions of Linux, it does not require an AMD Athlon or Pentium 4 system to run it. Far from it, Knoppix will actually run on an i486 with 20MB of RAM for text mode (the shell), or with 82MB of RAM for the KDE GUI. I was also very impressed by the fact that Knoppix recognised most of my hardware on start-up, with the exception of my USB Iomega Zip 100.

After using Knoppix several times now, I am finding Linux to be a refreshing alternative to MS Windows. Due to the ease-of-use of Knoppix, most notably it's lack of a need to install onto the hard drive, I think that Knoppix serves as an excellent starting point for Linux newbies like me.

It has certainly made me want to partition my hard drive and get a full installation of Linux. Judging by the rapid growth of the use of Linux these days, especially in industry, a familiarity with the operating system will become more and more important for all computer users for years to come, not just IT professionals.

Thanks to Udo Gungerich for informing me about Knoppix!

Updated 2020 : note that the above post is out-of-date, given this post was originally published in 2003, but is left here for archival purposes. It does appear that the Knoppix project is still active, but these days I use Fedora which can now also install via live media like USB sticks.