While thinking of a title for this article, I played with the idea of using "survival" rather than "success", such is the level of pessimism in the e-commerce area these days. This level of negativity is nothing more than a barrier to success, in my opinion, and while the downturn in the E-commerce sector is real, there are many steps that can be taken to help to avoid a similar fate than many of the failed "dot coms" of recent times.

Firstly, I will present an overview of the concepts behind Relationship Marketing, then I will show two case studies that show examples of applying these principles: Case 1 showing the lack of effective relationship building; Case 2 showing how a company can get it right. Both of these examples are based on actual events experienced by this author, although obviously all company names have been removed.

"Relationship Marketing" is not just a marketing buzzword, it is a very practical approach to running a business online for many years to come.

Relationship marketing is all about keeping existing customers happy, rather than constantly focusing on attracting new customers. In fact, servicing and selling to existing customers is viewed to be just as important to long term success as attracting new customers. This can be difficult for many companies to get right, especially large companies that contain dedicated sales departments where the culture is always to focus on getting new sales.

Here the principle is simple, if you treat your customers right; your customers will advocate your product/service to other people for you, in a sense acting as your "partner" by potentially gaining you new customers. Furthermore, your existing customers are more likely to use your product/service again if they are pleased with the value that you provide. In fact, most customers remain loyal not because of promotions or marketing campaigns, but because of the value that they receive.

The diagram below illustrates this point: 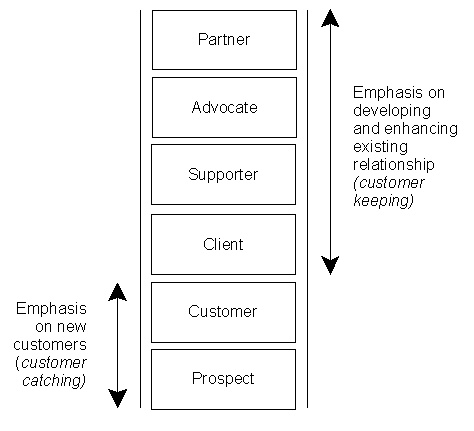 In the top part of the diagram the emphasis is placed on building on the relationship with the exiting customer, while the bottom part emphasizes attracting new customers. These are complimentary ambitions, strength in one area is ineffectual if the other area is neglected.

For the purpose of this example, let us assume that we have an Internet Service Provider referred to as "ISP X". A web developer is using this ISP to host a web site for him. As part of the package, which is quite expensive (€440 approximately), the developer is getting 30 MB webspace, a domain name, and limited tech support.

The first problem arises when there is a delay of 3-4 weeks in setting up the account. After several phone calls and e-mails to ISP X, the developer eventually is able to access the sever account and upload the web site. At this stage the client of the web developer, the person for whom the web developer is actually working for, is rather upset at the delay in setting up the site.

After nine months of the site being live, the web developer's client decides that they no longer want to keep their web site. The web developer contacts the person at ISP X who he has previously dealt with in order to have the account closed, but unfortunately that person has left the company. A new contact is established with the ISP, and this person promises to look after settling the account.

Towards the end of the twelve month hosting period that had been initially purchased from the ISP, the web developer receives notice in the post that the web hosting package in question needs to be renewed. As the account hand been cancelled, this comes as quite a surprise to the developer. He tries to make contact with his contact at ISP X, but unfortunately that person has now also left the company, in fact the entire company has been bought out by another larger firm.

Although the developer explains that he had previously cancelled this account, he continues to receive bills in the post for the next year asking him to have the account renewed. The site in question is still on the Internet, despite the developer asking for it to be removed (he is unable to do this himself due to his login on the server no longer working!). Eventually, a THIRD company buy out the second, and the account is finally shut down and the bill for renewal scrapped. Almost two years have elapsed. The developer never uses this service again, and has nothing but bad things to say about all of the companies in question.

After the stress associated with working through ISP X, our web developer now starts to shop around for a new service provider. He settles on "ISP Y": the rates are much lower than ISP X (€180 approximately); the web sites look very professional; and the range of add-in extras that they supply as part of their basic package (100 MB webspace, unlimited e-mail addresses etc.), is far in excess of that of ISP X. After paying for the package, again including a domain name, through ISP Y's online ordering form, the account is ready within 24 hours, while the domain name is working within 4 days.

The web developer experiences no difficulty in setting up the site, and is very impressed with the standard of technology that is in place on the ISP's servers to support his work. When a minor technical problem does arise with the package, an e-mail to ISP Y usually results in a reply and a resolution of the problem within one day. On one such occasion, they even reply on a Sunday afternoon to an e-mailed query. Furthermore, ISP Y also have a low-cost phone line for immediate support.

Impressed with the service, the web developer not only uses ISP Y for all of his future projects, but he also recommends this company to anyone he knows in the business. In this way, he becomes an advocate of ISP Y, which is a direct result of the value of the service that they provide.

Now we can conclude that Relationship Marketing is all about holding onto existing customers as well as gaining new ones; while existing customers remain loyal if the value of the product/service that they receive is sufficiently high; while loyal customers can also act as advocates of this product/service. Yet remarkably, many start-up e-commerce companies managed to ignore these simple business concepts, and as a result lost the customers that they had fought so hard to gain in the first place. It is at times like this that "success" and "survival" really do equal the same thing, but if Relationship Marketing is instilled into the company culture to begin with, then situations like these can be avoided.

Updated 2020 : note that the above was originally published in 2002, but is left here for archival purposes.